The 2018 August Write Away Challenge

If you’re just joining us, please feel free to go back and read the previous content so you’re up to speed! Otherwise, scroll down for today’s prompt.

Reminders before we get started:

Sun, Aug. 05 – What are your best character traits? 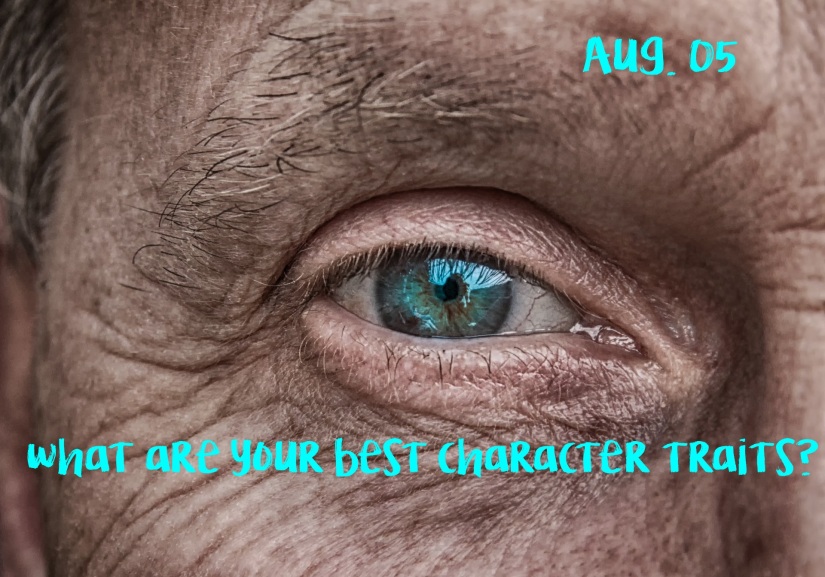 Let me be honest. I know myself well enough to not try and mislead you here. I have very few character traits that I consider “good.” I have plenty of bad traits — where’s that writing prompt, eh? I could have written about those all month long!

But for all that, I do think there are a couple of things about me that are… well, not really good, but… maybe… better than all the bad ones?

For instance, yesterday we were prompted to write about forgiveness. One thing I genuinely like about myself is that I see people (not in a creepy, Sixth Sense sort of way). If you’ve known me for some time or you’ve followed my writing, you know that I love characters. I have always loved characters. I learned early on that most villains are not really evil. Most villains in our lives and in the stories we read are actually just characters living out their own tragedies.

But Sauron! Someone will say. Yes, yes… Sauron the Deceiver. Awful bloke. He may be the exception to the rule. But Boromir. Smeagol. Denethor. Even, perhaps, Saruman. These are characters with a story. They didn’t just show up wanting to do something bad that would ruin mankind. There was a series of events that brought each of them to the moment of the telling of The Lord of the Rings — and though we are given only a few morsels of those stories, we know that some of it was difficult. Maybe even heartbreaking.

The point is that most people aren’t just out there making terrible choices to hurt other people; most people come to the place of making terrible choices after years of being hurt and broken and disappointed and abandoned and alone. We are each living our own story with our own struggles — some of which we overcome, and some we do not. But when we can see the world in that way, it is harder to despise any man, I think. It’s like Henry Wadsworth Longfellow wrote:

If we could read the secret history of our enemies, we should find in each man’s life sorrow and suffering enough to disarm all hostility.

Maybe it’s the writer in me, but… for better or for worse, I think that’s one of the best things about me — I don’t typically just see the foolish or hurtful behavior of others; I see a tragic past that brought them to make such a decision. And that makes forgiveness feel a lot more like compassion.

From the shores of Wicket Lake,

View all posts by Sarah

This site uses Akismet to reduce spam. Learn how your comment data is processed.